KONY 2012: State Propaganda for a New Generation | The Vigilant Citizen 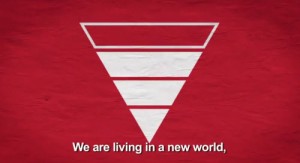 "We are living in a new world" indeed. The KONY 2012 logo aptly represents how a viral video and social media can reverse the propaganda model. Don't be fooled however. Power is still not in the hands of the base of the pyramid ... far from it. It is all about appearances.

“The overnight viral sensation KONY 2012 brought worldwide awareness to the African war criminal Joseph Kony. Beneath this commendable cause, lies however an elaborate agenda that is presented in the video in a very manipulative way. We’ll look at the agenda behind KONY 2012 and how it uses reverse psychology to not only justify a military operation in Africa, but to actually have people demand it.” – http://www.vigilantcitizen.com

“KONY 2012 is a movement backed by some of the world’s most powerful entities and has precise goals. As the movie’s intro states, it is an experiment. It is an opportunity to create a movement that can be fully trackable, quantifiable and manageable through social media whose culmination is a U.S. military intervention in Uganda…

…a cleverly orchestrated campaign specifically aimed at today’s youth, the future citizens of the world. Using state-of-the-art techniques and new technologies, the campaign is a first attempt at “reverse propaganda”, where the agenda APPEARS to emanate from the people.

By using emotions, irrational thoughts and superficial explanations, KONY 2012 attempts to trick well-meaning people, who desire to make a positive change in the world, to instead fuel a gigantic war machine that is controlled by the world’s elite.” – http://www.vigilantcitizen.com